The RBS has submitted an amended application for Planning Permission in Principle for a mixed use development on Dundas Street, Fettes Row and Royal Crescent.

Included is a proposal to build four x four storey blocks of flats in Royal Crescent on the south boundary of the park and construct four x five storey blocks to the south west of the park in Fettes Row.   These features of the application have the potential to change the nature of a very special  park irrevocably. SO  PLEASE  DO COMMENT.

To view the application go to www.edinburgh.gov.uk/planningcomments

The most helpful documents to look at are:

An amendment to the previous application was suggested by Historic Environment Scotland (the Government’s influential advisory body on heritage matters) of four x two storey buildings to the south and four x four storey buildings to the south west (ie. in this case no higher than the existing building). The Friends of the Park welcomed this suggestion.

Of course, this is a better planning application, but is it the best?   Does it sufficiently negate the damaging impact of buildings on the edge of the park?   We urge all park users to think about it and, please, let the Council know their views.

2.  Density of proposed development.  This remains at 400 housing units, bringing a potential 765 new residents into the area immediately bordering the park.  The park is already only half the size recommended by the Council’s Open Space Strategy.   Could  this place undue pressure on a limited and precious green resource?  Again – do, please,  let the Council know what you think.

Park users who responded to the previous version of this application should know that the  comments they made then will still stand and will be taken into account.  No need to repeat them if they are unchanged, but it might be wise to refer to them.

There was a big response to the application in its previous form.  Help us create a similar response this time round.  We need the best possible outcome for the park. 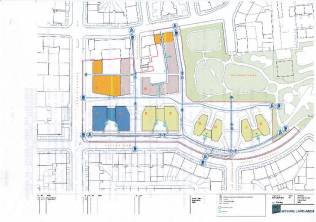 This is for the Friends of King George V and Scotland Yard Parks in Edinburgh
View all posts by Andy →
This entry was posted in Uncategorized. Bookmark the permalink.
%d bloggers like this: